Crooked Paths Made Straight is a continuing story of the Baker family who settles in the Michigan Territory in 1833. Establishing the new settlement requires stamina, endurance, compromises with the natives, and most of all a strong trust in God and His provisions. Each character in Crooked Paths Straight is confident that their individual paths will lead to happiness and security, yet when trials arise…they soon realize that God’s path is best. This is the second book in the Newburg Chronicle series. 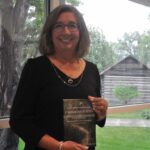 This is Elizabeth’s sixth novel and her second complete historical which pulls out her love of research. Her books concentrate on Michigan history, especially in her county along the banks of the Shiawassee River. Elizabeth has lived in Michigan her whole life where she has raised three children and will soon welcome the birth of her first granddaughter. She loves capturing not only the early history of the state but the amazing aspects of living in the Great Lakes state.

A meticulously crafted historical fiction tale written with great detail and faith.  This author does a fine job of showing human nature at its best and worst, providing an interesting study of human frailties and strengths.  Thankfully, the power of the settler’s Christian faith sustained them through their myriad trials and triumphs.  This quote sums it up best:  “God did make crooked paths straight. She just needed to trust God, for He knew her heart better than even she did.”  An enjoyable read – historical fiction fans will definitely be delighted!

After working as a newspaper reporter, I soon realized that the best part of writing articles was the research. When I began writing historical fiction, I realized it pulled in that element to the extreme. I then fell in love with history but especially the elements of searching through a cemetery for a specific character, finding significant paragraphs in a newspaper article about a particular family, and then sitting down to fictionalize the details I found. It was fun to mix history with fiction.

The Baker family, in the The Newburg Chronicles series, came to life in an era that doesn’t always get much attention in the historical fiction scene…the 1830s. This was the beginning of many small settlements in Michigan due to the opening of the Erie Canal. Settlers would travel the canal into Detroit by steamboat and then purchase oxen in the city to move inland. Often they’d only have a map with their property outlined and would then have to blaze a trail west and north to find that property to build a home and farm the land…often sight unseen.

The trips inland were grueling and filled with many unknowns including Indians, rough river crossings, swarms of mosquitoes, and howling wolves. What they’d discover was a vast wilderness with trees to gird, cut, and use to build their homes. They’d then need oxen to help prepare the soil to plant crops. Daily chores were exhausting for not only the men but also the women and children.

How did they survive? How did families work together to establish a farm? Did they get help or were they all alone? If you enjoy learning about the early settlers of a new territory, The Newburg Chronicle series is for you! 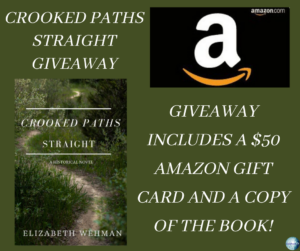 To celebrate her tour, Elizabeth is giving away the grand prize package of a copy of Crooked Paths Straight and also a $50 gift card!!

For Him and My Family, February 9