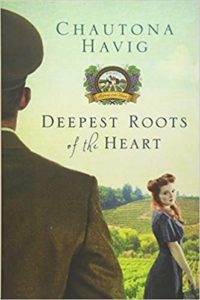 Theirs are the Deepest Roots of the Heart. The Carrillos have a history in the valley that stretches as deep as grapevine roots in the soil.

During WWII, Avelino Carrillo spent four harrowing years in the South Pacific with one thought driving his survival: to return to his beloved home in Napa Valley.

For a century, they worked the vineyard at their family home, la Casa de los Sueños, until they lost the property to a wealthy land baron. Now, Avelino is determined to reclaim the land and home he loves so much.

When he meets Amelia, a young woman who lives at the vineyard with her grandfather, he finds that regaining his birthright isn’t his only struggle—he battles the longing of his heart as well.

Follow Avelino in this split-time novel as he struggles to overcome local bigotry and personal demons to create the life he desires. 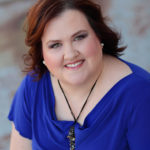 A sweeping saga, totally absorbing and extraordinary.  Fascinating and truly human characters – well drawn and memorable. A split time story well-woven with a deeply contemplative discussion of differences and similarities between choices of faith, church and culture.  This author consistently enables her readers to find deeper meaning by considering their own and others values, beliefs and faith-based stances. As a California native, I am especially captivated by this richly written historical narrative.  Highly recommended – a must-read!

I Fell in Love with California & History in the Same Year

When the second pastor of small churches with private Christian schools was hauled off to jail, the pastor of our little school closed the doors—just in case. Several of us went underground as homeschoolers in a time when homeschooling was something people did when they were missionaries or lived in… Alaska or something.

There I sat at our kitchen table in Ventura, doing my schoolwork at our little kitchen table. On Wednesday and Sunday nights, I’d take tests in the school office, get my new PACEs (“Packet of Accelerated Christian Education”) and go home to work again. Sometimes, I’d sit up in my room to read the bigger chunks of information—like from my California State History PACEs.

Look, I don’t know if all states have such great history, but California’s fascinated me. I remember coloring the state map, the missions, and the flag—despite it not being required. I looked for more books about it, and in the process, I fell in love with history.

A couple of years later, my aunt brought heaping bags of books for us to read when we lived out in the middle of nowhere with no electricity or running water. We were bored. But she brought books. In those sacks? A tiny little paperback. The Legend of Susan Dane.

Although that book had its utterly ridiculous moments, it also sparked something in me. Between eyerolls of disgust at everyone fawning over Susan Dane’s reputed beauty and over a strapless dress in the last quarter of the 19th century, it showed a beautiful picture of the lives of the Californios.

That book fanned the flames of my love of history until I burned with curiosity over what was reasonable.Click To Tweet What wasn’t. And how to find out what really happened.

Fast forward a couple of decades, and a character emerged—a Californio who refused to learn ingles for the sake of the immigrants to his country. Don Ruiz Carrillo said, “If I go to their country, I learn their language, but if they come to my country, they should learn mine.” In short, I took the words I’d heard my own father say all my life and turned it on its head. I put an American in California before statehood and without means to learn the language.

When señor Carrillo meets the young Americano with red hair and freckles, she tells a heartbreaking story that she manages to convey through pantomime and her attempts to imitate his language. Here, I deviated from my father. While Dad would be kind and helpful in teaching someone his language in his country, señor Carrillo decides that this young woman is more important than his preferences.

That story is still being written—Crushed Dreams. However, when I realized how I wanted to end the story, I knew I had a problem. The final book in this series will have a bittersweet ending—one with hope and promise, but not technically “happy.” So, I decided to write a prequel/sequel to the series—a split-time novel where the reader lives the past with the characters of the present. This way, going into the entire series, you know there’s a happy ending, so you can appreciate the heartache and sacrifice that will come in that last book.

Crushed Dreams is slated to release soon, so I’m eager to share the prequel to the Legacy of the Vines series with you. 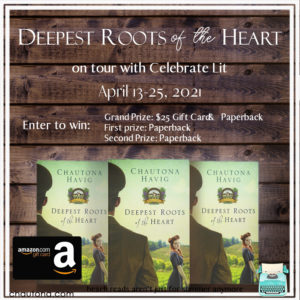 To celebrate her tour, Chautona is giving away the grand prize of a $25 Amazon Gift card & paperback!!

She Lives To Read, April 14

For Him and My Family, April 22