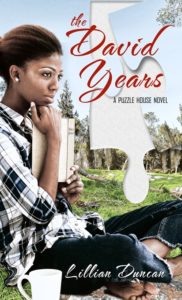 Nia looked at her aunt and asked, “So what am I ‘spose to do now?”

“Have you ever heard of King David from the Bible?”

“There were a lot of years between the time David was anointed as the king and he actually became the king. It’s a time for you to grow in your relationship with God.”

“And then later I get to be king?” Nia giggled.

“I meant that figuratively not literally but these are your learning years–your David Years.”’

Nia Johnson has spent the past four years developing a closer relationship to God. She wants to believe she’s still anointed to become a healer at Puzzle House but as each year passes, she has more and more doubts.

Now that she’s graduated from high school and is an adult she is sure it’s time to take the mantle of healing Rachel passed to her so many years before. But the harder she tries, the more it eludes her. 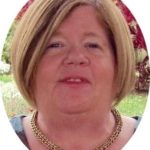 Lillian lives in a small town in Ohio with her husband. She writes the types of books she loves to read. Even though her books cross genres, they have one thing in common, faith-based stories that demonstrate God’s love—and lots of action. OK—that’s two things.

She was a school speech pathologist for over 30 years but retired in 2012 after being diagnosed with bilateral brain tumors due to Neurofibromatosis Type 2 (NF2), a rare genetic disease.

Whether as an educator, a writer, or a speech pathologist, she believes in the power of words to transform lives, especially God’s Word. To learn more about Lillian and her books, visit: www.lillian–duncan.com.

An enjoyable story that shares the very real spiritual challenges that folks of faith can experience. We can all be deceived, disappointed, distracted and disillusioned as we try to live faithfully.  Although second in the Puzzle House series, The David Years includes enough background that it serves well as a stand-alone (although I enjoyed the first in the series a great deal, too).  This one would make an excellent YA book club selection; there is plenty of discussion material from the various characters and situations created.  A good read for anytime of the year – enjoy!

As I was reading, this question kept coming to mind: How much of the characters’ internal dialog resonates with each of us?  Do we stop ourselves from pursuing relationships, the truth, or opportunities for service merely because we talk ourselves out of it for false reasons?

Nia looked at her aunt and asked, “So what am I ‘spose to do now?”

“Have you ever heard of King David from the Bible? There were a lot of years between the time David was anointed as the king and he actually became the king. David was tested many times during those years. Those years were very important to David’s growth as a man so that he would be the king God wanted him to be when the time was right.”

“So what are you saying, Auntie?”

“I’m saying these are your David years.”

And so the story begins. Most of the book takes place after Nia’s high school graduation during her first year in college. She’s impatient to begin her time as healer and tries to make that happen in her timing—not God’s.

But God will not be rushed and whether Nia likes it or not, she’s still in her David Years—her learning years. I’m sure you’ve heard the saying, ‘we learn from our mistakes.’ Well, Nia learns a lot that year. In other words, she makes a lot of mistakes.

My college years are long, long past so I thought it might be hard to get into the mindset of a college student, but it really wasn’t. I thought back to all the mistakes I made during my college years and the story took off from there!

Even though Nia is a college student, her story will resonate for anybody who’s facing changes in their life, no matter the age. We all have learning years throughout our lifetime—our very own David Years.

Life changes whether we want it to or not. A new marriage. A baby. A divorce. A new job. Retirement. No matter what age we are, we all struggle with finding our place in the world, especially when life changes. The good news is that as Christians, we may not have all the answers, but we know where to find them. 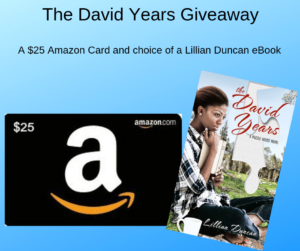 To celebrate her tour, Lillian is giving away a grand prize of a $25 Amazon gift card and the choice of one of her eBooks!!