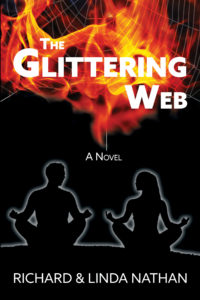 What if everything you thought was true and good — wasn’t?

Stripping away years of deception doesn’t come easily—especially to Loren and Eve Montcrest. They believe they’re following the true path as initiates in Seattle’s Arcane Institute, their society’s elite training academy for the New World Order in 2050.

Pursuing spiritual power despite enormous dangers, they are caught up in a fiery, fast-paced succession of intrigues and adventure that rocks their love for each other and even their sanity.

Only a shocking, last-minute intervention can strip away the veil of deception and rescue them from
destruction—but will they give up everything for it? 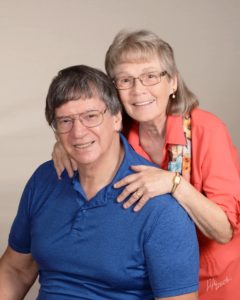 Whether writing apologetics or page-turners, Richard and Linda write together. The Glittering Web is their first novel, a thriller rooted in their own lives and the occult. Richard has a master’s in Christian history and a B.S. in biology and has worked in psychiatric units for over 25 years. Linda has a B.A. in psychology. She has managed Logos Word Designs, LLC, since 1992, providing professional writing, editing, and publishing consultation services. She is also a staff freelance editor with Redemption Press. Together and singly, they have taught and spoken at conferences, seminars, churches, and on the radio. #glitteringweb ~ www.theglitteringweb.com

Fans of futuristic, fantasy and the occult genres will relish this story full of extravagant descriptions and scary stuff.  The authors have created a fantastical fictional account based on some of their own personal experiences.  The Glittering Web is quite vivid, detailed, tense and filled with drama. Characters develop throughout with increasingly emotive interplay. This is not a future I hope will transpire! The age-old battle between good and evil is waged relentlessly in this novel, readers will stay edge-of-their-seat bound to discover who reigns triumphantly!

More from Richard and Linda

What if everything you thought was true and good—wasn’t?

That’s what we painfully learned from our years in the New Age / psychedelic movement in the San Francisco Bay Area during the ’60s and ’70s–years in which we almost lost our sanity, our souls, and our lives.

Like our characters Loren and Eve who are initiates in Seattle’s Arcane Institute in the year 2050, we pursued spiritual power into a glittering web of dangers and deceptions.

Although true to our own inner trials and temptations, The Glittering Web is a fast-paced thriller and sci-fi fantasy with a life of its own, an evangelistic thrust, and a call to Christians to wake up to this huge mission field all around us where today a New Age practitioner is running for President. As it exposes the deceitfulness of this popular movement, it also glorifies the great love and power of Jesus Christ to reach the lost.

See our author video at www.theglitteringweb.com and join the Insider’s Club for our free quarterly newsletter, articles, contests, drawings, Q&As, and much more. There’s also a glossary of over 60 New Age terms to help you.

To celebrate their tour, Richard and Linda are giving away, to TWO winners, the grand prize of a paperback copy with a membership to the Insider’s Club (see www.theglitteringweb.com).

For the Love of Literature, October 16