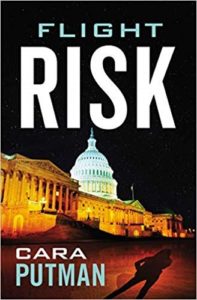 In Flight Risk, bestselling author Cara Putman returns with a romantic legal thriller that will challenge the assumptions of truth tellers everywhere.

Savannah Daniels has worked hard to build her law practice, to surround herself with good friends, and to be the loyal aunt her troubled niece can always count on. But since her ex-husband’s betrayal, she has trouble trusting anyone.

Jett Glover’s father committed suicide over a false newspaper report that ruined his reputation. Now a fierce champion of truth, Jett is writing the story of his journalism career—an international sex-trafficking exposé that will bring down a celebrity baseball player and the men closest to him, including Savannah’s ex-husband.

When Jett’s story breaks, tragedy ensues. Then a commercial airline crashes, and one of Savannah’s clients is implicated in the crash. Men connected to the scandal, including her ex, begin to die amid mysterious circumstances, and Savannah’s niece becomes an unwitting target.

Against their better instincts, Jett and Savannah join ranks to sort the facts from fiction. But can Savannah trust the reporter who threw her life into chaos? And can Jett face the possibility that he’s made the biggest mistake of his life? 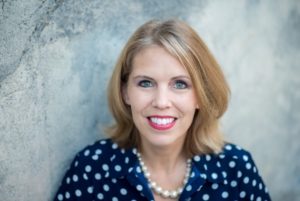 Since the time she could read Nancy Drew, Cara has wanted to write mysteries. In 2005 she attended a book signing at her local Christian bookstore. The rest, as they say, was history. There she met a fellow Indiana writer Colleen Coble. With prompting from her husband, Cara shared her dream with Colleen. Since those infamous words, Cara’s been writing award-winning books. She is currently writing book 33 and dreaming up future books, not hard when she sees what-ifs everywhere.

Cara Putman is an active member of ACFW and gives back to the writing community through her service on Executive Board. She has also been the Indiana ACFW chapter president and served as the Area Coordinator for Indiana.

Cara is also an attorney, full-time lecturer at a Big Ten university, active in women’s ministry, and all around crazy woman. Crazy about God, her husband and her kids that is. She graduated with honors from the University of Nebraska-Lincoln (Go Huskers!), George Mason Law School, and Purdue University’s Krannert School of Management. You can learn more about Cara at www.caraputman.com <http://www.caraputman.com/>.

Gripping, tense and multi-layered. Flight Risk is a deftly-written and timely novel.  The author has very carefully woven together a storyline that is so plausible it gives one pause to consider their assumptions.  Nicely done!  This reader would enjoy following these characters in as they find themselves in another white-knuckle and brain tingling storyline. I highly recommend this one from one of my favorite authors!  Get your copy and enjoy! 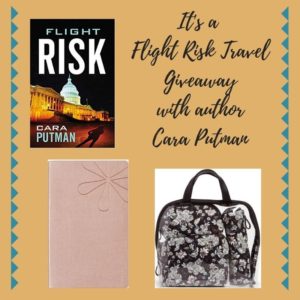 To celebrate her tour, Cara is giving away the grand prize package of a Vera Bradley travel cosmetics set, a journal for capturing vacation memories, a copy of Flight Risk, and a bracelet!!

Adventures of a Travelers Wife, April 6

For Him and My Family, April 10

Through the Fire Blogs, April 11

Lights in a Dark World, April 12

Spoken from the Heart, April 15

Writer Without a Space, April 16

Little Homeschool on the Prairie, April 17

For The Love of Books, April 18